Case Study of Socialized Housing Properties: Can You Sell Your Property Or Not? 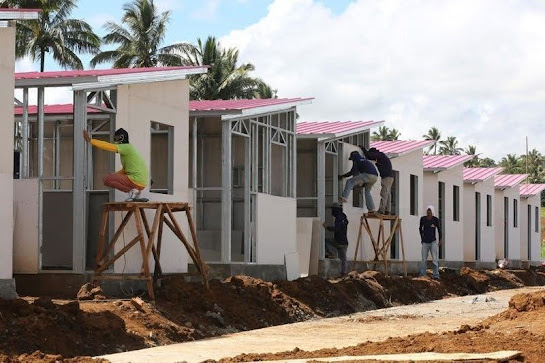 Recently, we have see the trends of people selling their old homes located in NHA housing projects provided by the national government through National Housing Authority for free and have decided to "sell off their rights" on the said properties because the original owners have died out and have given their rights to their heirs. However, heirs of the deceased sometimes would care less to stay on those old neighborhoods they grew up and have relocated or decide to move out and live in exclusive subdivisions or other residential estates due to their economic migration and the change of their lifestyles or have permanently moved out of the country particularly people who have garnered success in their fields or careers.
Question:
My parents (Mr. & Mrs. L.) are both beneficiary of a house with a 100 square meter lot area from a National Housing Authority (NHA) located in Pampanga. They were victims of Mt. Pinatubo eruption in 1990s and have left our town and resettled in a much safer place in the same province. Since my father passed away in 2006 and they (mother and one sibling and her immediate family) had been living in that home since they relocated in 1998. However, they have relocated again in Cebu City in 2015 including my mother due to my sister's work assignment with a multi-national company. The place was attended by one of my sibling (younger brother) who lived there in my parents' old home but he recently passed away due to his lingering illness a few months ago. Although, I live in the United States at the moment and have built my life and family there. With the ongoing pandemic, we had scheduled a teleconferencing with my other siblings and my mom who have relocated in Cebu City have a frutiftul discussion on the intention of selling the property after a long discussion during my brother's demise.  What can we do?
Answer:
Based on our initial investigation (due diligence on the documents provided) on the disposition of this property with NHA, It show  it is not  yet transferred under the names of the awardees (spouses Mr. & Mrs. L.) and has to undergo extrajudicial settlement process before transferring the full ownership to the wife and children because Mr L. died in 2006 while Mrs. L is still alive at age of 90 as of this writing and were given certificate of allocation in 2004 about two years before the demise of Mr. L.
In the Republic Act No 10884 supersedes Republic No 7279, states that properties CANNOT BE SOLD outright after being awarded the said parcel of land and improvements to the intended beneficiary by the national government through National Housing Authority, a government agency handling socialized housing for the poor.
From: Republic Act No. 7279
"Sec. 14. Limitations on the Disposition of Lands for Socialized Housing. — No land for socialized housing, including improvements or rights thereon, shall be sold, alienated, conveyed, encumbered or leased by any beneficiaries as determined by the government agency concerned. Should the beneficiary unlawfully sell, transfer, or otherwise dispose of his lot or any right thereon, the transaction shall be null and void. He shall also lose his right to the land, forfeit the total amortization paid thereon, and shall be barred from the benefits under this Act for a period of ten (10) years from the date of violation. In the event the beneficiary dies before full ownership of the land is vested on him, transfer to his heirs shall take place only upon their assumption of his outstanding obligations. In case of failure by the heirs to assume such obligations, the land shall revert to the Government for disposition in accordance with this Act."
However, there are certain technical loopholes that can be made like a prescriptive period as stated on this law of 10 years after release of transfer of certificate of  title to the awardees (if they have applied immediately after they were granted the full rights to stay through legal ownership in the possession of a transfer certificate of title) given by the NHA as private owners and stayed there in that period. After the prescriptive period of more than 10 years or so after release of transfer certificate of title that it can only be transferred/conveyed to new owners (heirs of the awardees) or if in some cases sold thereof to other would be buyers.
Currently, the property is under discussion again with the heirs and Mrs. L  at the time of this writing. If only it that the certificate of award given in 2004 was transferred say in 2005 there won't be no legal implications to worry about. In the mean time, we will do a further follow up on this case.
NEED ASSISTANCE IN YOUR PROPERTY PROBLEMS? Give us a call at (045) 961-5936 or contact us through this link.
Sources:
Republic Act No. 7279 shorturl.at/atzMZ
Republic Act No. 10884: shorturl.at/alIO5
Photo Credit: Philippine Star / Boy Santos
About the Writer

Other articles to read:
What You Should Know About Estate Settlement https://bit.ly/33fWUzV
Why Should Avail Your Tax Amnesty For Your Real Estate Properties https://bit.ly/3n6ItWP