Why Invest in the City of San Fernando, Pampanga?

In celebration of its 19th years as a city with its founding anniversary as a town on 16th August 1754.


The City of San Fernando, Pampanga is the 99th city recognized by the Republic of the Philippines under Republic Act 8990 on the 4th of February 2001 under the bill filed by Second District Representative and former City Mayor Oscar Rodriguez and the campaign of former Mayor Dr. Jesus Reynaldo Aquino in 1997. It is one of the component city of the province of Pampanga where the gubernatorial seat and the national government agencies and services of Region III are located. 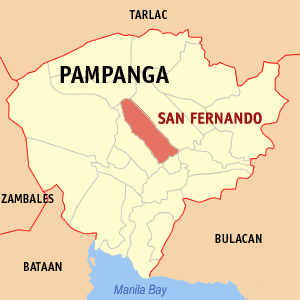 City of San Fernando, Pampanga has transformed into a first class component city and has garnered recognition and awards from local traders and businesses to international investors with major approach in infrastructure development happening around the metropolis due to its pouring investments from major developers investing in this city. It also has spillover effect from the ongoing development inside Clark Freeport Zone which is 17 kilometers north of the city due to its close proximity to Clark Airport / Diosdado Macapagal International Airport and striking distance to Metro Manila which is 66 kilometers south of this city via North Luzon Expressway.

City of San Fernando have transformed into a new city with job growth and development for the locale including the other town folks of nearby towns of Bacolor and Mexico. It has received the two awards in 2011 and 2014 as the Most Business Friendly City in the Philippines awarded by Philippine Chamber of Commerce and Industry. Yet it has garnered other prestigious from Department of Interior and Local Government in other categories. Claiming 16 awards in total over the past ten years.

The local government unit simplified the process of getting permits into a "One Stop Shop" creating an ease of doing business better in terms of approval.

San Fernando As A Christmas Capital

The city has received recognition as the Christmas capital of the Philippines due to the flashing, glittering lights happening around the section of McArthur Highway in Dolores to Jose Abad Santos Avenue. Passing people going to Olongapo City, Bataan and Zambales could see this sector with the dazzle and feel of Christmas during the months of September to December. San Fernando also had a competition called the Giant Lantern Festival (Ligligan Parul in Pampango) which has brought wide local and international acclaim from all over the world and was featured in Disneyland and in San Francisco, California over a decade ago.

San Fernando As A Scene of Holy Week

With holy week coming in a few months the "Maleldo" (Pampango term for holy week) is celebrated with reverence among the predominantly Roman Catholic Kapampangan who are pious followers of this faith. There are several reenactments happening around Pampanga particularly in Brgy. San Pedro Cutud were an annual cruxificion of Jesus Christ by reenactors that was happening during Good Fridays including the self-flagellation of penitents during Maundy Thursdays to Good Fridays.

Since 2012, flood control projects were created in order to mitigate disasters coming from perennial flooding in the recent decades after the silting of nearby rivers and recent dumping trash and encroachment of waterways by informal settlers and even unscrupulous business owners. The city government from previous administration of former Mayor Oscar Rodriguez made drastic changes in helping the locality against flooding specially the San Fernando River, the creek networks connecting to Angeles and outlets going to Rio Grande de Pampanga (Pampanga River delta) in nearby towns of Santo Tomas to Macabebe / Masantol towns. There was a development of a heritage section of the city wherein old homes from the Spanish era are preserved through its private-public partnership program in maintaining the city.

Real estate and housing developments have been progressive with different subdivision propping up over the years from sugar cane fields which has been part of our industry in previous century when the small town of San Fernando, Pampanga was a agricultural town devoted in sugar cane and rice farming. It has grown over the years introducing industrial and present day technological revolution over the years it has become a small sleepy town to a progressive yet vibrant city. The areas undergoing development are located over the northern part of city particularly located in areas of Baranggay Sindalan, Del Carmen, Calulut, Bulaon, Malino, Telabastagan, Dela Paz, and Baliti. Commercial properties located along McArthur Highway and Jose Abad Santos Avenue (Olongapo-San Fernando-Gapan Road) have risen in terms of their market and tax values in recent years due to demand and the increase of the development in retail areas, office and commercial / business offices in those areas with high volume of cars passing or heavy foot traffic.